Skip to content
We require all employees and clients to adhere to Covid precautions. Click here for more information. 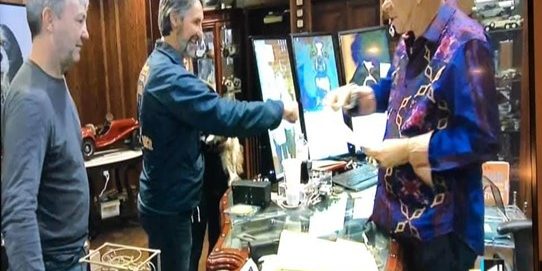 Haltom City, TX. — July 1, 2021 — Haltom-City-based Serial Entrepreneur Ron Sturgeon has been collecting auto memorabilia and rare toys for more than four decades, so when word got out that he might sell some of his collection, buyers came calling.

American Pickers Mike Wolfe and his brother Rob Wolfe stopped by DFW Elite Toy Museum to see Ron as they picked their way across Texas.  They went nuts when Ron opened the doors to what a local newspaper reporter once called the repository of cool stuff.

“Mike and Rob were fun to hang out with,” said Sturgeon. “They both have great respect for collectors and for the stories behind the pieces that they pick,” said Sturgeon.

Of particular interest to Mike was a scrapbook belonging to artist and early car and motorcycle customizer Von Dutch that Ron had purchased for $7,200 at a Peterson Museum auction of Von Dutch items.

Mike Wolfe wanted to own the book because it contained photographs of a vintage XAVW Von Dutch motorcycle that Wolfe already owns and photos of another iconic Von Dutch bike from which Wolfe has the gas tank, the only known surviving piece.

“Mike worked pretty hard to buy that Von Dutch scrapbook from me because we both appreciate what a unique glimpse it provides into the private life and work of an icon in the customization movement,” said Sturgeon.

The episode featuring Ron and the museum, titled Fort Knox of Toys, aired Monday, June 14, 2021, at 8 pm CST on The History Channel. Sturgeon hosted an invitation-only watch party at Tarrant Events Center in Haltom City on Monday night with his fiancée, Linda Allen, who is also in the segment. Toy Museum Curator Rodney Ross, a high school friend of Sturgeon’s, also made a cameo in the segment.

Guests were able to watch the show as it aired and enjoyed food provided by several local food trucks. Exotic cars from Ron Sturgeon’s collection, including a Bugatti Veyron and a classic Mercedes roadster, were on display at the Haltom City event center.

Sturgeon was previously featured on CNBC’s Blue-Collar Millionaire in a segment that chronicled his success in the auto salvage industry.  In addition, he and his King Charles Cavaliers have appeared in an episode of HGTV’s Pet Palaces, and he has filmed sizzle reels for other reality shows.

“I am proud to have a toy museum in Haltom City, where I started my first business, a VW repair shop, nearly 50 years ago,” said Sturgeon. Dog-friendly DFW Elite Toy Museum is open from 9 am to 5 pm on weekdays with free admission and welcomes group tours by appointment.

“A few people who saw us on American Pickers have stopped in to see arguably the best toy museum in America and the only museum of its kind in Haltom City,” said Sturgeon. “We hope that many more will come check out the cool stuff we have on display,” said Sturgeon.

One of Fort Worth’s most popular party venues, Tarrant Events Center is located at 5230 Denton Highway in Haltom City, TX just off Loop 820 and offers more than 5000 square feet of indoor space for corporate events, parties, quinceneras, weddings and other special events. To reserve the event venue, call (817) 996-3636 or visit the TEC website.

DFW Elite Toy Museum is a free museum open to the public located at 5940 Eden Drive in Haltom City, TX. The museum includes more than 3000 pieces collected by serial entrepreneur and real estate developer Ron Sturgeon. The museum was recently featured in the DFW guidebook “100 Things to Do in DFW Before You Die.” To learn more, visit the dog-friendly museum’s website at dfwelitetoymuseum.com or follow the DFW Elite Toy Museum on Facebook.

BYOB Allowed for Your Event

Food Services Include BYOF, Food Trucks, or Caterer of Your Choice

10 Huge LED TV’s Project Your Message to Everyone

Choice of Tables for Your Event Needs

Accommodates 50-300 Guests for a Variety of Events